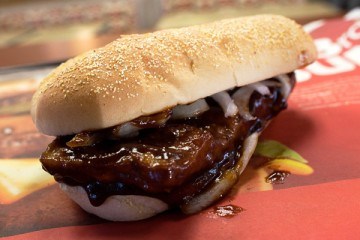 1. The McRib is a product of "restructured meat technology." Rene Arend came up with the idea and design of the McRib, but it’s a professor from the University of Nebraska named Richard Mandigo who developed the "restructured meat product" that the McRib is actually made of. According to an article from Chicago magazine, which cites a 1995 article by Mandigo, "restructured meat product" contains a mixture of tripe, heart, and scalded stomach, which is then mixed with salt and water to extract proteins from the muscle. The proteins bind all the pork trimmings together so that it can be re-molded into any specific shape - in this case, a fake slab of ribs.

2. The entire McRib sandwich contains about 70 ingredients - including a flour-bleaching agent used in yoga mats. A closer inspection of McDonald’s own ingredient list reveals that the pork sandwich contains a total of 70 ingredients. This includes azodicarbonamide, a flour-bleaching agent often used in the production of foamed plastics. The entire sandwich packs a whopping 500 calories, 26 grams of fat, 44 grams of carbs, and 980 milligrams of sodium.