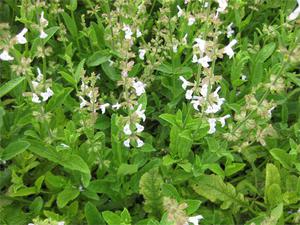 Perennial growing to 0.6m by 0.3m. It is hardy to zone 6. It is in flower from June to September. The flowers are hermaphrodite (have both male and female organs) and are pollinated by Bees. The plant prefers light (sandy) and medium (loamy) soils and requires well-drained soil. The plant prefers acid, neutral and basic (alkaline) soils. It cannot grow in the shade. It requires dry or moist soil.*

Dan Shen has long been used in Chinese medicine and recent research has confirmed the validity of its use in the treatment of heart and circulatory problems.*

In traditional Chinese medicine, danshen has been used to prevent and treat heart conditions and strokes. Results from animal and human studies support these uses of danshen to some extent because danshen is known to decrease the blood's ability to clot in at least two ways. First, it limits the stickiness of blood components known as platelets. It also decreases the production of fibrin--threads of protein that trap blood cells to form clots. Both these effects help to improve blood circulation. In addition, chemicals in danshen may relax and widen blood vessels, especially those around the heart. In animal studies, chemicals in danshen may also have protected the inner linings of arteries from damage. Some other research suggests that danshen potentially may increase the force of heartbeats and slow the heart rate slightly. All these effects potentially could improve heart function and help to restore functioning after a stroke, but they need more study before danshen can be recommended.*

In animal studies, danshen has appeared to interfere with the development of liver fibrosis--the formation of scar-like fibers in the liver. Because the non-functioning fibers crowd out active liver tissue, liver function decreases gradually as the amount of fibrous tissue increases. Having chronic hepatitis and habitually drinking large amounts of alcoholic beverages are the major causes of liver fibrosis, which could also result from exposure to chemicals or certain drugs. Danshen may also increase blood flow into the liver, so the length of time that potentially damaging substances stay in the liver may be reduced, also reducing the possible injury they may cause. Results from a few animal studies show that it may also protect kidney tissues from damage caused by diabetes. In China, danshen has also been studied for treating acute pancreatitis, painful and possibly dangerous inflammation of the pancreas. All of danshen's possible organ-protective actions need further study.*

Recently, initial results from laboratory studies show that danshen may have some activity against human cancer cells and HIV (the virus that causes AIDS). Danshen may stop the spread of several different cancer cells types by interrupting the cell division process and also by causing cancer cells to disintegrate. For HIV, chemicals in danshen may block the effectiveness of an enzyme, HIV-1 integrase, that the virus needs to replicate. Neither of these potential uses of danshen has been tested in humans.*

In traditional Chinese medicine, Dan Shen has been used to prevent and treat heart conditions and strokes. Its use improves the micro-circulation, increases blood flow to the coronary artery, improves myocardial contraction and adjusts the heart rate.*
×