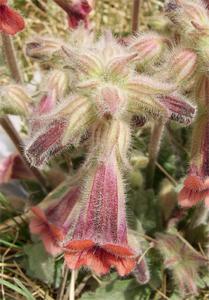 Perennial growing to 0.3m by 0.25m. It is hardy to zone 9. It is in flower from April to June, and the seeds ripen from May to July. The flowers are hermaphrodite (have both male and female organs) and are pollinated by Insects. The plant prefers light (sandy) and medium (loamy) soils and requires well-drained soil. The plant prefers acid, neutral and basic (alkaline) soils. It can grow in semi-shade (light woodland) or no shade. It requires moist soil.*

Edible Parts: Leaves; Root. Leaves. No further details are given. Root - cooked. Boiled nine times before it is eaten. This suggests that the root is somewhat toxic, or at least has a very bitter flavour. Having boiled it nine times (and presumably throwing the water away each time), there is going to be very little left in the way of vitamins and minerals.*

Antiseptic; Cardiac; Diuretic; Febrifuge; Haemostatic; Hypoglycaemic; Skin; Tonic. This plant, called Di Huang in China, is commonly used in Chinese herbalism, where it is one of the most popular tonic herbs and is considered to be one of the 50 fundamental herbs. The root is the main part used and it can be prepared in four different ways - charcoaled, prepared (but no details of the preparation are given) when it is called Shu Di Huang and fresh or dried when it is called Sheng Di Huang. The roots are antibacterial, antiseptic, cardiac, diuretic, febrifuge, haemostatic, hypoglycaemic and tonic. They are used in the treatment of a wide range of ailments, including anaemia, cancer, bleeding, constipation, coughs, fever and premature ejaculation.*

The charcoaled root is used to stop bleeding and tonify the spleen and stomach. The fresh root is used to treat thirst, the rash of infectious diseases and bleeding due to pathological heat. The dried root is used to treat bleeding due to blood deficiency and to nourish the vital essence. The prepared root is used to treat dizziness and palpitations due to anaemia or blood deficiency, chronic tidal fever, night sweats, dry mouth, lumbago and nocturnal emissions. The roots of cultivated plants are harvested in the autumn or early winter, whilst wild plants are harvested in early spring. They can be used fresh or dried. The root is an ingredient of 'Four Things Soup', the most widely used woman's tonic in China. The other species used are Angelica sinensis, Ligusticum wallichii and Paeonia lactiflora. The leaves are bruised and used in the treatment of scaly eczema or psoriasis.*

In TCM the prepared root of Chinese Foxglove is used to treat dizziness and palpitations due to anaemia or blood deficiency, chronic tidal fever, night sweats, dry mouth, lumbago and nocturnal emissions.*
×