Breathe Well May Offer Support For:

Immune Support Plus May Offer Support For: 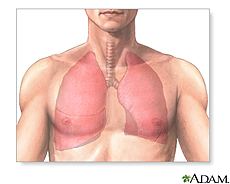 Chronic Obstructive Pulmonary Disease (COPD) makes it hard for you to breathe. Coughing up mucus is often the first sign of COPD. Chronic bronchitis and emphysema are common COPDs.

Your airways branch out inside your lungs like an upside-down tree. At the end of each branch are small, balloon-like air sacs. In healthy people, both the airways and air sacs are springy and elastic. When you breathe in, each air sac fills with air like a small balloon. The balloon deflates when you exhale. In COPD, your airways and air sacs lose their shape and become floppy, like a stretched-out rubber band.

What are the Causes of Pulmonary Disease?

Cigarette smoking is the most common cause of COPD. Breathing in other kinds of irritants, like pollution, dust or chemicals, may also cause or contribute to COPD. Quitting smoking is the best way to avoid developing COPD.

Treatment can make you more comfortable, but there is no cure.

COPD, or chronic obstructive pulmonary (PULL-mun-ary) disease, is a progressive disease that makes it hard to breathe. "Progressive" means the disease gets worse over time.

COPD can cause coughing that produces large amounts of mucus (a slimy substance), wheezing, shortness of breath, chest tightness, and other symptoms.

Cigarette smoking is the leading cause of COPD. Most people who have COPD smoke or used to smoke. Long-term exposure to other lung irritants, such as air pollution, chemical fumes, or dust, also may contribute to COPD.

To understand COPD, it helps to understand how the lungs work. The air that you breathe goes down your windpipe into tubes in your lungs called bronchial tubes, or airways.

The airways are shaped like an upside-down tree with many branches. At the end of the branches are tiny air sacs called alveoli (al-VEE-uhl-eye).

In COPD, less air flows in and out of the airways because of one or more of the following: 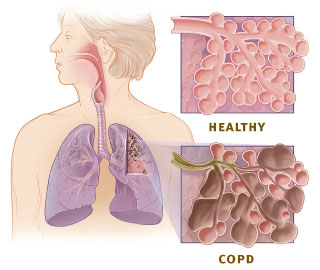 The illustration shows the respiratory system and images of healthy alveoli and alveoli damaged by COPD.

In emphysema, the walls between many of the air sacs are damaged, causing them to lose their shape and become floppy. This damage also can destroy the walls of the air sacs, leading to fewer and larger air sacs instead of many tiny ones.

In chronic obstructive bronchitis, the lining of the airways is constantly irritated and inflamed. This causes the lining to thicken. Lots of thick mucus forms in the airways, making it hard to breathe.

Most people who have COPD have both emphysema and chronic obstructive bronchitis. Thus, the general term "COPD" is more accurate.

COPD is a major cause of disability, and it's the fourth leading cause of death in the United States. More than 12 million people are currently diagnosed with COPD. An additional 12 million likely have the disease and don't even know it.

COPD develops slowly. Symptoms often worsen over time and can limit your ability to do routine activities. Severe COPD may prevent you from doing even basic activities like walking, cooking, or taking care of yourself.

Most of the time, COPD is diagnosed in middle-aged or older people. The disease isn't passed from person to person, you can't catch it from someone else.

COPD has no cure yet, and doctors don't know how to reverse the damage to the airways and lungs. However, treatments and lifestyle changes can help you feel better, stay more active, and slow the progress of the disease.

Chronic obstructive pulmonary disease, or COPD, refers to a group of diseases that cause airflow blockage and breathing-related problems. It includes emphysema, chronic bronchitis, and in some cases asthma.

COPD is a leading cause of death, illness, and disability in the United States. In 2000, 119,000 deaths, 726,000 hospitalizations, and 1.5 million hospital emergency departments visits were caused by COPD. An additional 8 million cases of hospital outpatient treatment or treatment by personal physicians were linked to COPD in 2000.

In the United States, an estimated 10 million adults had a diagnosis of COPD in 2000, but data from a national health survey suggest that as many as 24 million Americans are affected.

However, the proportion of the U.S. population aged 25-54, both male and female, with mild or moderate COPD has declined over the past quarter century, suggesting that increases in hospitalizations and deaths might not continue.

Why women's COPD rates are rising so much faster than men's

How COPD can be prevented

Early detection of COPD might alter its course and progress. A simple test can be used to measure pulmonary function and detect COPD in current and former smokers aged 45 and over and anyone with respiratory problems. Avoiding tobacco smoke, home and workplace air pollutants, and respiratory infections are key to preventing the initial development of COPD.

How COPD is treated

Treatment of COPD requires a careful and thorough evaluation by a physician. The most important aspect of treatment is avoiding tobacco smoke and removing other air pollutants from the patient's home or workplace. Symptoms such as coughing or wheezing can be treated with medication. Respiratory infections should be treated with antibiotics, if appropriate. Patients who have low blood oxygen levels in their blood are often given supplemental oxygen.

To learn more about COPD, visit these sites: