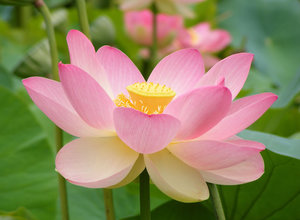 Perennial growing to 1m by 1m. It is hardy to zone 5. It is in flower from July to August. The flowers are hermaphrodite (have both male and female organs) and are pollinated by Insects, beetles. The plant prefers light (sandy), medium (loamy) and heavy (clay) soils. The plant prefers acid, neutral and basic (alkaline) soils. It cannot grow in the shade. It can grow in water.

Edible Parts: Flowers; Leaves; Root; Seed; Stem. Edible Uses: Coffee. Root - cooked as a vegetable. It is also a source of starch or arrowroot. Much used and relished in Chinese cooking, the root has a mild flavour and a crisp texture. It can be cooked with other vegetables, soaked in syrup or pickled in vinegar. The root contains about 1.7% protein, 0.1% fat, 9.7% carbohydrate, 1.1% ash. Young leaves - cooked or raw. Used as a vegetable. The leaves can also be used to wrap small parcels of food before cooking them. Stems - cooked. A taste somewhat like beet. They are usually peeled before use. Seed - raw or cooked. A delicate flavour. The seed can be popped like popcorn, ground into a powder and used in making bread or eaten dry. The bitter tasting embryo is often removed. The seed contains about 15.9% protein, 2.8% fat, 70% carbohydrate, 3.9% ash. The roasted seed is a coffee substitute. Petals can be floated in soups or used as a garnish. The stamens are used to flavour tea.*

The leaves are used as plates for eating food off.*

Sources: Nelumbo Nucifera Lian Zi Plants For A Future, England 1996-2008.
This work is licensed under a Creative Commons License.