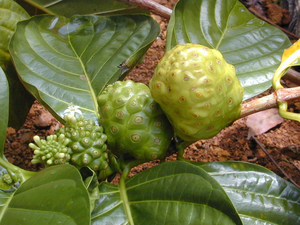 Morinda citrifolia, commonly known as Great morinda, Indian mulberry, Beach mulberry, Tahitian Noni, Cheese fruit or since recently: Noni (from Hawaiian), Nono (in Tahitian), Mengkudu (from indonesia), Nonu (in Tongan), and Ach (in Hindi), is a shrub or small tree in the family Rubiaceae. Morinda citrifolia is native to Southeast Asia but has been extensively spread by man throughout India and into the Pacific islands as far as the islands of French Polynesia, of which Tahiti is the most prominent. It can also be found in parts of the West Indies.*

Noni grows in shady forests as well as on open rocky or sandy shores. It reaches maturity in about 18 months and then yields between 4-8 kg of fruit every month throughout the year. It is tolerant of saline soils, drought conditions, and secondary soils. It is therefore found in a wide variety of habitats: volcanic terrains, lava-strewn coasts, and clearings or limestone outcrops. It can grow up to 9 m tall, and has large, simple, dark green, shiny and deeply veined leaves.*

Although noni's reputation for uses in folk medicine extends over centuries, no medical applications as those discussed below have been verified by modern science. In China, Samoa, Japan, and Tahiti, various parts of the tree (leaves, flowers, fruits, bark, roots) serve as tonics and to contain fever, to treat eye and skin problems, gum and throat problems as well as constipation, stomach pain, or respiratory difficulties. In Malaysia, heated noni leaves applied to the chest are believed to relieve coughs, nausea, or colic. The noni fruit is taken, in Indochina especially, for asthma, lumbago, and dysentery. As for external uses, unripe fruits can be pounded, then mixed with salt and applied to cut or broken bones. In Hawaii, ripe fruits are applied to draw out pus from an infected boil. The green fruit, leaves and the root/rhizome have traditionally been used to treat Menstrual Cramps and irregularities, among other symptoms, while the root has also been used to treat urinary difficulties. The bark of the great morinda produces a brownish-purplish dye for batik making; on the Indonesian island of Java, the trees are cultivated for this purpose. In Hawaii, yellowish dye is extracted from its root in order to dye cloth. The fruit is used as a shampoo in Malaysia, where it is said to be helpful against head lice. There have been recent applications also for the use of oil from noni seeds. Noni seed oil is abundant in linoleic acid that may have useful properties when applied topically on skin, e.g., anti-inflammation, acne reduction, moisture retention.*

Morinda is a concentrated extract of noni fruit (Morinda citrifolia) traditionally used for a wide spectrum of health benefits. The use of noni, also known as Indian mulberry, as food and medicine, originated in China and India, and migrated to Polynesia, Tahiti, Malaysia and Hawaii. The fruit has traditionally been used to support the musculoskeletal system, to support blood sugar within normal levels, and as a tonic. During World War II, native Polynesians gave American soldiers noni fruit to sustain their strength.*

In TCM, various parts of the tree (leaves, flowers, fruits, bark, roots) serve as tonics and to contain fever, to treat eye and skin problems, gum and throat problems as well as constipation, stomach pain, or respiratory difficulties.*
×