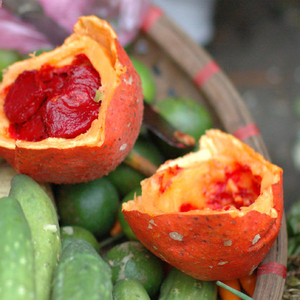 Momordica Charantia Spreng., commonly known as gac (IPA: /?gæk/, from Vietnamese: muop dang, or qu? g?c [qu? meaning "fruit"]; in Chinese: ???), is a Southeast Asian fruit found throughout the region from Southern China to Northeastern Australia. It is also known as Bitter Melon Baby Jackfruit, Spiny Bitter Gourd, Sweet Gourd, or Cochinchin Gourd. It has been traditionally used as both food and medicine in the regions in which it grows. Interior of ripe gac fruits Interior of ripe gac fruits Because it has a relatively short harvest season (which peaks in December and January), making it less abundant than other foods, gac is typically served at ceremonial or festive occasions in Vietnam, such as T?t (the Vietnamese new year) and weddings. It is most commonly prepared as a dish called xôi g?c, in which the aril and seeds of the fruit are cooked in glutinous rice, imparting both their color and flavor. More recently, the fruit has begun to be marketed outside of Asia in the form of juice dietary supplements because of its allegedly high phytonutrient content. Gac grows on dioecious vines and is usually collected from fence climbers or from wild plants. The vines can be commonly seen growing on lattices at the entrances to rural homes or in gardens. It only fruits once a year, and is found seasonally in local markets. The fruit itself becomes a dark orange color upon ripening, and is typically round or oblong, maturing to a size of about 13 cm in length and 10 cm in diameter. Its exterior skin is covered in small spines while its dark red interior consists of clusters of fleshy pulp and seeds.*

Other than the use of its fruit and leaves for special Vietnamese culinary dishes, gac is also used for its medicinal and nutritional properties. In Vietnam, the seed membranes are used to aid in the relief of dry eyes, as well as to promote healthy vision. Similarly, in Traditional Chinese medicine the seeds of gac, known as mubiezi (Chinese: ???), are employed for a variety of internal and external purposes. Recent attention is also beginning to be attracted in the West because of chemical analysis of the fruit suggesting that it has high concentrations of several important phytonutrients. Gac has been shown to be especially high in lycopene content. Relative to mass, it contains up to 70 times the amount of lycopene found in tomatoes. It has also been found to contain up to 10 times the amount of beta-carotene of carrots or sweet potatoes. Additionally, the carotenoids present in gac are bound to long-chain fatty acids, resulting in what is claimed to be a more bioavailable form. There has also been recent research that suggests that gac contains a protein that may inhibit the proliferation of cancer cells.*

In TCM Gac fruit is used for medicinal and nutritional properties. In Vietnam, the seed membranes are used to aid relief of dry eyes, and to promote healthy vision. Recent research suggests that gac may inhibit the proliferation of cancer cells.*
×