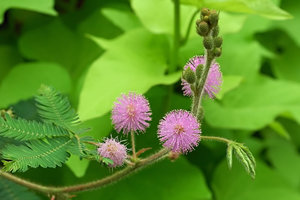 Mimosa pudica (Sensitive Plant) (pudica = shy), is a creeping annual or perennial herb often grown for its curiosity value: the compound leaves fold inward and droop when touched, re-opening within minutes. The species is native to South America and Central America, but is now a pantropical weed.*

The species is native to South America and Central America. It has been introduced to many other regions and is regarded as an invasive species in Tanzania, South Asia and South East Asia and many Pacific Islands. It is also regarded as invasive in parts of Australia. It is a declared weed in the Northern Territory, a declared plant in Western Australia, although not naturalised there, and control is recommended in Queensland. The species has also been introduced to Nigeria, Seychelles, Mauritius and East Asia but is not regarded as invasive in those places.*

Mimosa pudica is well known for its rapid plant movement. In the evening the leaflets will fold together and the whole leaf droops downward. It then re-opens at sunrise. This type of motion has been termed nyctinastic movement. The leaves also close up under various other stimuli, such as touching, warming, or shaking. The stimulus can also be transmitted to neighbouring leaves. These types of movements have been termed seismonastic movements. The movement is caused by "a rapid loss of pressure in strategically situated cells that cause the leaves to drop right before one?s eyes". This characteristic is quite common within the Mimosaceae family.*

The whole plant is astringent, cooling, antiseptic, anthelmintic, alterative and a blood purifier. Useful in cases of piles, fistula, bile and fevers.*