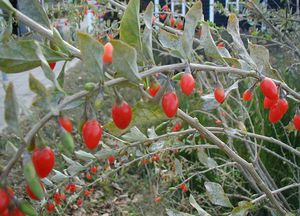 A decidious Shrub growing to 2.5m by 2m at a medium rate. It is hardy to zone 6. It is in flower from June to August. The flowers are hermaphrodite (have both male and female organs) and are pollinated by Bees. The plant prefers light (sandy), medium (loamy) and heavy (clay) soils, requires well-drained soil and can grow in nutritionally poor soil. The plant prefers acid, neutral and basic (alkaline) soils. It cannot grow in the shade. It requires moist soil. The plant can tolerate maritime exposure.

Edible Parts: Fruit; Leaves. Edible Uses: Coffee; Tea. Fruit - raw, cooked in soups etc or dried for later use. Sweet with an aniseed-like flavour. The fruit is an oblong berry about 15mm long by 8mm wid. Only the fully ripe fruits should be eaten. Leaves and young shoots - raw or cooked. A peppermint-like flavour, the leaves are used in salads or used as a potherb. Rich in vitamin A., the leaves also contain about 3.9% protein, 2.25% carbohydrate, 0.7% fat, 1.4% ash. The roasted seed is a coffee substitute. The dried leaves are a tea substitute.*

Antibacterial; Antipyretic; Cancer; Haemostatic; Hepatic; Hypoglycaemic; Infertility; Kidney; Ophthalmic; Tonic; Vasodilator. Chinese boxthorn is a major Chinese tonic herb with a history of almost 2,000 years of medicinal use. Both the berries and the root are used and traditionally the plant is believed to promote long life. The fruit is one of the most popular tonics used in Chinese herbal medicine. A decoction is used to clear the vision, strengthen the kidneys, restore semen and nourish the liver. The fruit protects the liver from damage caused by exposure to toxins. It is also used in the treatment of diabetes mellitus, vertigo, nocturnal emissions and aching back and legs. The fruit of many members of this genus is a very rich source of vitamins and minerals, especially in vitamins A, C and E, flavanoids and other bio-active compounds. It is also a fairly good source of essential fatty acids, which is fairly unusual for a fruit. It is being investigated as a food that is capable of reducing the incidence of cancer and also as a means of halting or reversing the growth of cancers. The seed is used as a haemostat for the control of bleeding, with a special action on the kidneys and sex organs. The root bark is antibacterial, antipyretic, hepatic, hypoglycaemic and vasodilator. It stimulates the parasympathetic nervous system, which controls involuntary bodily functions such as digestive secretions. The root is used in the treatment of pulmonary tuberculosis and pneumonia in small children, chronic febrile disease, night sweats, cough and asthma, tuberculosis, hypertension and diabetes mellitus. The root can be harvested at any time of the year but traditionally it is harvested in the spring and can be dried for later use. The root bark contains betaine. This can increase the rate of growth of farm animals and increase the weight and amount of eggs, it is used in the treatment of achlorhydria, atherosclerosis and hepatic diseases. Haemostatic.*

Hedge; Soil stabilization. Can be grown as an informal hedge, succeeding in maritime exposure. Plants have an extensive root system and can be planted to stabilize banks.*

Lycium fruit contains polysaccharides which have been demonstrated to strongly fortify the immune system. Lycium is also very rich in vitamin C and B vitamins. Furthermore, it is the richest source of carotenoids, including beta carotene.*
×