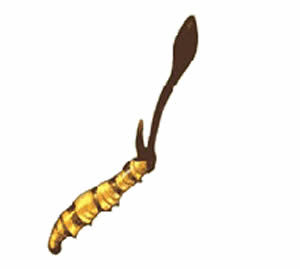 Cordyceps includes fungus that grows on caterpillar larvae, Hepialus armoricanus Oberthuer. Both are contained in the product and both are consumed. Cordyceps is used for a wide range of conditions including fatigue, sexual dysfunction, coughs, and as an adaptogen or immune stimulant. In addition to anecdotal data regarding efficacy, small clinical trials have been performed, but only review articles are available in English. No adverse effects have been reported. Although no known drug interactions exist, blood glucose should be monitored in diabetics using cordyceps due to possible hypoglycemic effect. In addition, animal studies show proliferation of progenitor red blood cells; therefore, Cordyceps should not be used by those with myelogenous type cancers. Purported uses: Bronchitis, Chronic obstructive pulmonary disorders, Cough, Fatigue, Hepatitis, High cholesterol, Immunostimulation, Sexual dysfunction, Strength and stamina.*

The first mention of Cordyceps sinensis in traditional Chinese Medicine was in the 18th Century. The entire fungus-caterpillar combination is hand-collected for medicinal use. The fungus is highly prized by practitioners of Tibetan medicine, Chinese medicine and traditional herbal Folk medicines, in which it is used as an aphrodisiac and as a treatment for a variety of ailments from fatigue to cancer. It is regarded as having an excellent balance of yin and yang as it is apparently both animal and vegetable (though it is in actuality not vegetable, but fungal). Assays have found that Cordyceps species produce many pharmacologically active substances. They are now cultivated on an industrial scale for their medicinal value. The popularity of this fungus recently grew because two female Chinese athletes, Wang Junxia and Qu Yunxia, who beat the world records for 1500, 3000 and 10000 meters in the early 1990s, used it at the recommendation of their coach. According to Bensky (2006), laboratory-grown C. sinensis mycelium has similar clinical efficacy and less associated toxicity. He notes a toxicity case of constipation, abdominal distension, and decreased peristalsis, two cases of irregular menstruation, and one case report of amenorrhea following ingestion of tablets or capsules containing C. sinensis. In Chinese medicine C. sinensis is considered sweet and warm, it enters the Lung and Kidney channels; the typical dosage is 3-9 grams.*