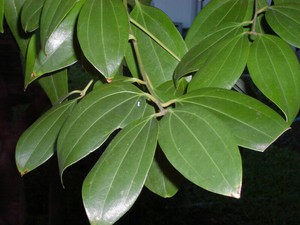 Cinnamon (Cinnamomum verum, synonym C. zeylanicum) is a small evergreen tree 10?15 metres (32.8?49.2 feet) tall, belonging to the family Lauraceae, and is native to Sri Lanka, India, Bangladesh, and Nepal. The bark is widely used as a spice due to its distinct odour. The leaves are ovate-oblong in shape, 7?18 cm (2.75?7.1 inches) long. The flowers, which are arranged in panicles, have a greenish colour, and have a distinct odour. The fruit is a purple one-centimetre berry containing a single seed.*

Cinnamon refers to several plants that belong to the genus Cinnamomum native to Southeast Asia. The bark, rich in essential oil, is used as a flavoring agent and as a spice. Medicinal uses include appetite stimulation, treatment of arthritis, inflammation, and dyspepsia. In traditional Chinese medicine, cinnamon is used with other herbs in decoctions for cold. In vitro studies have demonstrated that cinnamon has antioxidant, anti-inflammatory, immunomodulatory, and antimicrobial properties.*

Cinnamon has been studied in clinical trials for type 2 diabetes but results are conflicting. Well-designed clinical trials are needed to determine efficacy. Use of cinnamon flavored products has been associated with oral adverse effects. Certain cinnamon products are high in coumarin content that can cause liver damage and can also interact with other drugs. Purported uses: Diabetes, Stomach ulcers, Inflammation, Arthritis.*

In medicine cinnamon acts like other volatile oils and once had a reputation as a cure for colds. It has also been used to treat diarrhoea and other problems of the digestive system. Cinnamon is high in antioxidant activity. The essential oil of cinnamon also has antimicrobial properties, which can aid in the preservation of certain foods. "Cinnamon" has been reported to have remarkable pharmacological effects in the treatment of type II diabetes and Insulin Resistance. However, the plant material used in the study was mostly from cassia and only few of them are truly from Cinnamomum zeylanicum (see cassia's medicinal uses for more information about its health benefits). Recent advancement in phytochemistry has shown that it is a cinnamtannin B1 isolated from C. zeylanicum, which is of theraputic effect on type II diabetes with the exception for the postmenopausal patients studied on C. cassia. Cinnamon has traditionally been used to treat toothache and fight bad breath and its regular use is believed to stave off common cold and aid digestion.*

In TCM Cinnamon uses include appetite stimulation, treatment of arthritis, inflammation, and dyspepsia. In traditional Chinese medicine, cinnamon is used with other herbs in decoctions for cold.*
×