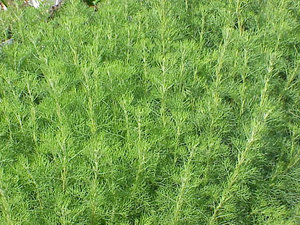 Annual growing to 3m by 1m at a fast rate. It is hardy to zone 7. It is in flower from August to September, and the seeds ripen from September to October. The flowers are hermaphrodite (have both male and female organs) and are pollinated by Insects. The plant prefers light (sandy) and medium (loamy) soils, requires well-drained soil and can grow in nutritionally poor soil. The plant prefers acid, neutral and basic (alkaline) soils. It can grow in semi-shade (light woodland) or no shade. It requires dry or moist soil.

Edible Uses: Condiment. Artemisia contains an essential oil in the leaves used as a flavouring in spirits such as vermouth.*

Antibacterial; Antiperiodic; Antiseptic; Carminative; Digestive; Febrifuge. Qing Ho, better known in the West as sweet wormwood, is a traditional Chinese herbal medicine. An aromatic anti-bacterial plant, recent research has shown that it destroys malarial parasites, lowers fevers and checks bleeding. Artemisia is often used in the Tropics as an affordable and effective anti-malarial. The leaves are antiperiodic, antiseptic, digestive, febrifuge[176, 178]. An infusion of Artemisia leaves is used internally to treat fevers, colds and diarrhea.*

Externally, Artemisia leaves are poulticed onto nose bleeds, boils and abscesses. The leaves are harvested in the summer, before the plant comes into flower, and are dried for later use. The plant contains artemisinin, this substance has proved to be a dramatically effective anti-malarial against multi-drug resistant Plasmodium. Clinical trials have shown it to be 90% effective and more successful than standard drugs. In a trial of 2000 patients, all were cured of the disease. The seeds are used in the treatment of flatulence, indigestion and night sweats.*

An herb commonly known as wormwood or mugwort. Different species have been used in Western and Chinese medicinal formulas to treat various ailments. Terpenoids and flavonoids derived from Artemisia annua have cytotoxic activities in several human tumor cell lines. Two of the components, artemisinin and artesunate, have been studied as anticancer treatment. The plant is traditionally used for reducing fevers, inflammation, headache, bleeding and for treating malaria and has been shown to have antibacterial properties. Systematic reviews on Artemisinin show that it is as effective as quinine in treating both uncomplicated and severe malaria. However, increased risk of relapse may limit its uses. It is unclear whether artemisia is effective against strains of malaria that are resistant to quinine. Patients with gastrointestinal disorders or those taking antacids should not take artemisia because it increases the production of stomach acid.*