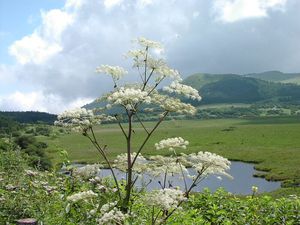 Angelica Sinensis is a perennial growing to 1m by 0.7m, is hardy to zone 7 and is not frost tender. Angelica Sinensis flowers from August to September, and the seeds ripen from September to October. The flowers are hermaphrodite (have both male and female organs) and are pollinated by Insects. The plant is self-fertile.

Dang Gui is a well-known Chinese herb that has been used in the treatment of female ailments for thousands of years with a reputation perhaps second only to ginseng (Panax ginseng). Angelica Sinensis is particularly noted for its 'blood tonic' effects on women[218].*

Angelica Sinensis root has a sweet pungent aroma that is very distinctive and it is often used in cooking, which is the best way to take it as a blood tonic[254]. One report says that the root contains vitamin B12 and can be used in the treatment of pernicious anaemia[176].*

Dang Quai is commonly used in the treatment of a wide range of women's complaints where it regulates the menstrual cycle and relieves period pain[218, 238, 254] and also to ensure a healthy pregnancy and easy delivery[218].*

Angelica Sinensis use prevents the decrease of liver glycogen and protects the liver[176] and has an antibacterial action, inhibiting the growth of various bacteria including Bacillus dysenteriae, Bacillus typhi, B. comma, B. cholerae and haemolytic streptococci[176]. The root is an ingredient of 'Four Things Soup', the most widely used woman's tonic in China[254]. The other species used are Rehmannia glutinosa, Ligusticum wallichii and Paeonia lactiflora[254]. The root is harvested in the autumn or winter and dried for later use[254, 283].*

Source: Angelica Sinensis Dang Quai Plants For A Future, England 1996-2008.
This work is licensed under a Creative Commons License.

In TCM Dang Quai is commonly used in the treatment of a wide range of women's complaints where it regulates the menstrual cycle and relieves period pain and also to ensure a healthy pregnancy and easy delivery.*
×