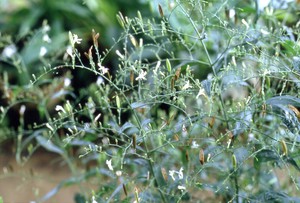 Andrographis paniculata is a bitter tasting annual plant prevalent in much of Asia. Andrographis is often used in combination with other herbs in traditional medicine to treat infectious diseases and associated fevers.*

This herb and its fractionated extracts have been studied for their antioxidant, antiviral, antibacterial, antiinflammatory, antihypertensive, antineoplastic, anti-ulcerogenic, and analgesic properties with some positive results. Formulations containing standardized extracts of andrographis are marketed in Western countries as dietary supplements for cold and flu.*

Kan Jang, a standardized extract of Andrographis paniculata and Eleutherococcus senticosus, has been studied in manufacturer-sponsored clinical trials for relief of respiratory symptoms from cold and flu. Andrographis has also been studied in an early phase trial for male fertility. Dietary supplements containing Andrographis have been promoted for cancer prevention, cancer treatment, and to counter the toxicity of chemotherapy in humans but clinical evidence is lacking. Theoretically, Andrographis can cause multiple interactions including with many drugs used in cancer care. This herb should be used with caution. Purported uses: Immunostimulation, Influenza, Colds, Cancer, HIV.*

The active constituents of Andrographis paniculata are diterpenoid lactones known as Andrographolides. These compounds were shown to cause apoptosis through the induction of c-Jun N-terminal kinase and through the activation of capases in vitro. They also inhibited E-selection expression resulting in the decreased adhesion of gastric cancer cells to endothelial tissues. Andrographolides can also suppress IFN-gamma and IL2 production and inhibit production of reactive oxygen species. In addition, they were shown to inhibit HIV-induced dysregulation of cell cycle and to increase CD4+ lymphocyte levels in HIV-1 patients. Andrographolides also demonstrated anti inflammatory activity by inhibiting nitric oxide production and cyclooxygenase-2 expression . Andrographis paniculata extract exhibited selective antiviral, antimicrobial, and antimalarial activities. It also inhibited tumor cell growth by stimulating cytotoxic T-lymphocyte production through IL-2 and IFN-ã secretion. In animal models, Andrographis demonstrated antioxidant and anti-angiogenic properties, and reduced cyclophosphamide induced toxicity by inhibiting proinflammatory cytokines. In other studies, the extract demonstrated calcium channel inhibition effect that can cause relaxation of smooth muscle resulting in decrease in blood pressure and heart rate, and relaxation of uterus. It also showed antiplatelet effects by inhibiting thrombin and platelet activating factor. When given orally, the extract was shown to neutralize snake venom.*