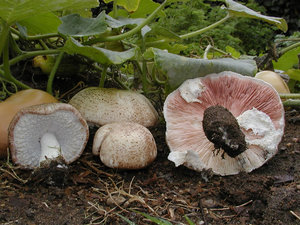 Agaricus blazei is an edible mushroom native to Brazil and cultivated in Japan for its medicinal uses.*

Agaricus blazei is an edible mushroom native to Brazil and cultivated in Japan for its medicinal uses. In vitro experiments and studies done in mice have shown that Agaricus has immunomodulatory, antitumor, and antimutagenic properties. Agaricus Blazei Murill has been used to treat arteriosclerosis, hepatitis, hyperlipidemia, diabetes, dermatitis, and cancer. The polysaccharides and anti-angiogenic compounds present in Agaricus are thought to be responsible for its antitumor properties. Such effects are believed to be exerted by immunopotentiation or direct inhibition of angiogenesis.*

A recent randomized study showed that oral administration of Agaricus extract improved the natural killer cell activity and quality of life in gynecological cancer patients undergoing chemotherapy. However, more studies are needed to confirm these observations. Agaricus blazei was also shown to have antidiabetic effects in vitro and in animal studies. In addition, results from a study done in human subjects with Type 2 diabetes suggest benefits of agaricus extract in improving insulin resistance. Liver damage and deaths following consumption of Agaricus have been reported. Due to its immunopotentiating effects, Agaricus can potentially interfere with immunomodulating drugs althought such interactions have not been studied.*