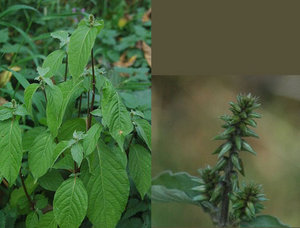 Achyranthes Seed - cooked. A good substitute for cereal grains in bread-making, Achyranthes seeds have often been used for this purpose in famine years2, 6, 1. The light brown oblong seed is about 1mm long9. Achyranthes Leaves - cooked6, 7. Used as a vegetable in the same manner as spinach8.*

Achyranthes acts predominantly on the lower half of the body and is used in the treatment of aching back and knees and asthenia of the lower limbs3, 1, 4. Research suggests that they can cause dilation of the cervix and so this herb should not be used when pregnant1. The Achyranthes herb is taken internally to treat hypertension, back pains, urine in the blood, menstrual pain, bleeding etc1, 2.*

The stem of the plant is used as a toothbrush that is said to be good for the teeth and is also a treatment for pyorrhoea5. Achyranthes can be used fresh or dried. The Achyranthes leaves and stems are harvested in the summer and are usually crushed for their juice or used in tinctures1. Achyranthes roots are harvested from 1 or 2 year old plants in the autumn or winter and usually dried and ground into a powder or used in decoctions1.*

Source: Achyranthes Bidentatae Plants For A Future, England 1996-2008.
This work is licensed under a Creative Commons License.

In TCM* the Achyranthes herb is taken internally to treat hypertension, back pains, urine in the blood, menstrual pain, bleeding, etc.*
×